We've compiled helpful tips from an ex-IRS agent on how you can use doubt as to liability & effective tax administration offers to help your clients. Learn how!

We covered the most common type of OIC—doubt as to collectibility—in the last installment of this series, but DATC isn’t the only type of OIC. Today, we’re covering the other two forms of OIC: doubt as to liability (DATL) and effective tax administration (ETA).

DATL: When the IRS Gets It Wrong

The concept behind a doubt as to liability offer in compromise isn’t complicated: is the tax debt assessed to the taxpayer legitimate or not? If the tax has somehow been assessed in error, then a DATL offer is likely the best course of action for your client.

For instance, I remember one particular case involving a taxpayer who owned a motorcycle and ATV shop. This taxpayer had transitioned their business from a sole proprietorship to an LLC midway through the year and paid taxes accordingly. However, the IRS assessed taxes on the LLC for the entire year in an audit—essentially double dipping on taxes for 6 months. The tax had clearly been assessed in error, a perfect example of when a DATL will be effective. The tax pro submitted an offer with details showing the business transition, and the offer was accepted.

So when you’re going over a client’s case, make sure the tax was assessed correctly. Did the IRS follow all the correct procedures when assessing the tax? Did they assess the tax within the assessment statute of limitations? Maybe the IRS assessed a trust fund tax against a person who didn’t meet the criteria of willfulness or responsibility. If you can show that the IRS didn’t assess your client’s tax by the book, you can make a good case for a DATL OIC.

Effective tax administration isn’t as easy to define as either doubt as to liability or doubt as to collectibility. That’s because ETA cases are the “everything else” category of the OIC world and can only be considered once DATL and DATC have been ruled out as options. In other words, ETA is for those unique cases when the tax has been assessed correctly and the taxpayer can technically afford to pay, but there’s still a good reason why they shouldn’t.

But why would the IRS ever accept an offer if the taxpayer can afford to pay and the tax was assessed correctly?

Well first, because Congress told them to. As a part of the IRS Restructuring and Reform Act of 1998, Congress instructed the Service to consider policies that encourage taxpayers to comply with the tax laws because “they believe the laws to be fair and equitable” (IRM 5.8.11.1). Essentially, Congress believed that more people would be willing to pay their taxes if they saw that the IRS is able to make exceptions in extreme circumstances.

But also because perception matters to the IRS. They know they’re not liked—that’s an unavoidable byproduct of the job they do. But they also don’t want to make their perpetual PR problem worse than it already is. One piece of advice I heard often during my time at the IRS was, “Don’t do anything that would land you on the front page of the paper.” Put plainly, the IRS isn’t going to seize the house of the 90-year-old woman living on Social Security. That’s bad for everyone involved.

So that’s the driving principle behind an ETA OIC: what outcome is going to look good for everyone involved?

Let me give you an example. I worked a case involving a taxpayer who made a living running a daycare. They owed back taxes and were facing the possibility of having their home and bank accounts seized if they didn’t cooperate. Also, this taxpayer recently lost both arms, had been hospitalized for months, and was lucky to be alive. Their offer showed clearly that, because of circumstances beyond their control, fulfilling their tax obligation would cause significant hardship.

In this case, what looks good for everyone? The taxpayer’s offer was accepted, and their IRS debt was one less thing they had to worry about.

Check out Part 4 where I talk about some common OIC mistakes I saw as an IRS agent, and how tax resolution software can help you avoid those mistakes.

Disclaimer: Tax law is complicated. Nothing I’ve said here should be mistaken for authoritative legal advice. Similarly, my commentary on my time at the IRS is reflective of my personal experience, and not any official stance or policy of the IRS. 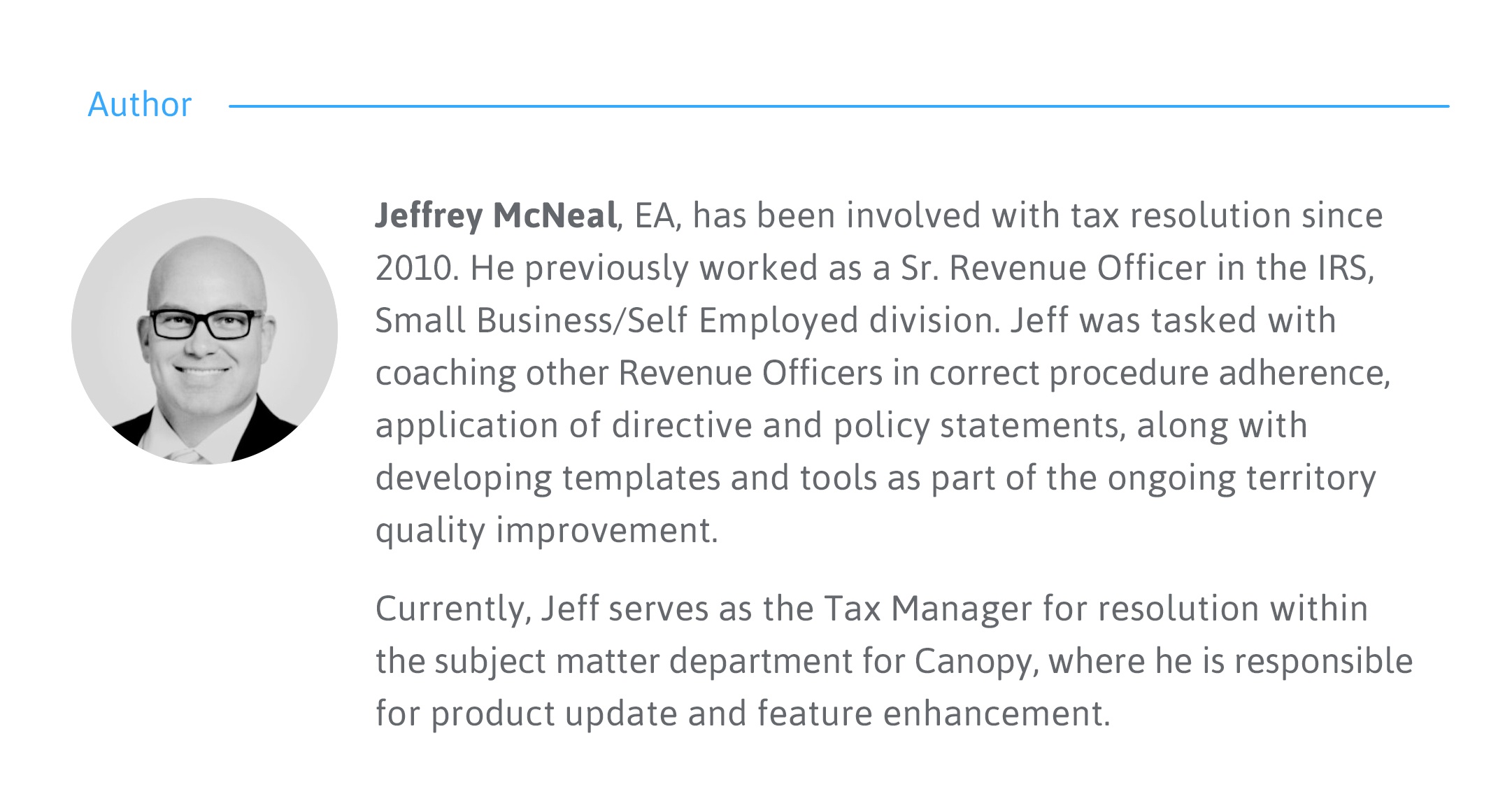 Submit this form, and a product specialist will be in touch soon.

We Care About Your Security

We are committed to the security of your data. Canopy uses 128-bit encryption to secure personal information and stores all sensitive data using Amazon Web Services. An audited SOC2 report is available upon request.